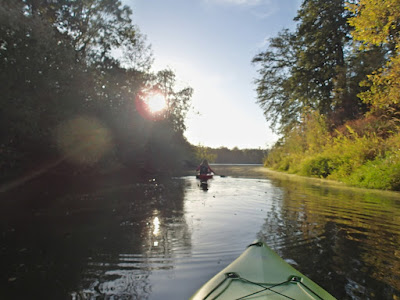 I have driven over this body of water countless times. Chances are you have, too. 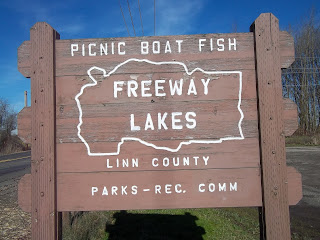 For years, passing along I-5 on our way from somewhere to somewhere else, we noticed a waterway under the road. At some point, a sign was installed: Oak Creek. But it didn't look like a creek. Then we caught a glimpse of wider water, set back in a grove of trees (oak trees, as it happened.) We started to wonder: was any of this water bordered by public property? And if so, how could we get to it? We perused maps and questioned the locals in nearby Albany. Thus it was that we discovered the access to Freeway Lakes, a series of three small lakes connected by short channels.

As it turns out, not only are these lakes next to (and under) the I-5 Freeway, they are a part of the freeway. Rock and fill were scooped out here and used in building the roadway. The resulting holes, filled with water, are now a popular county park. It is actually a pretty park and could be very peaceful with the right earplugs. 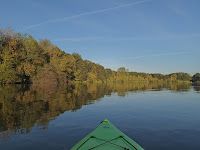 These lakes are regularly stocked with rainbow trout and are also known to produce largemouth bass and crappie, as well as the occasional catfish. The first lake is easily accessible, with a small dock and a wide, dirt-and-gravel boat ramp/parking area that is usually occupied by folks in lawn chairs, wielding fishing poles. 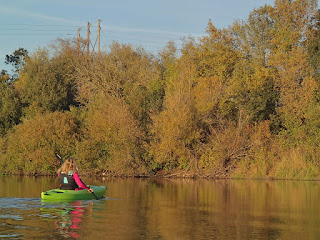 Of course, the bass are warmwater fish and not very active in late winter, and ODFW is not scheduled to start stocking here until March. This does not dissuade fishermen (and women) who are suffering from spring fever. Rumors abound among the worm-drowning hopefuls: possible early trout plants, unannounced by Fish and Wildlife. Huge holdovers from previous years, lurking in the depths. Of course, one particularly large one was caught just last week, I should have been there. I always should have been there last week; I seem to live in a perpetual fish-related time warp. 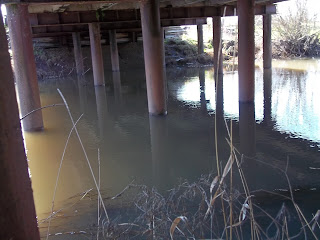 This spot is popular with local families, who bring kids, dogs, and picnics and hang out on the banks. It's a fun short paddle, as well; the three lakes only total 39 acres, but the shoreline is pretty and birdwatching can be surprisingly good. The creek comes in at the east end, and at high water levels there is a little current, especially passing under Three Lakes Road between the first and second lakes. Later in the year, this passage is a bit shallow, but still passable in the deeper part on the right. 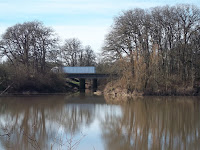 The easiest way to find these lakes from I-5 is to take the Highway 34 exit (Corvallis and Lebanon) and head east toward Lebanon. Watch on the left for Seven Mile Lane, which comes up pretty quickly. Follow Seven Mile Lane until it swings left toward the freeway; the road that takes off to the right is Three Lakes Road, which passes between the middle and eastern pools. There is roadside parking near the bridge, or turn right into the parking area. There is a vault toilet here, and small boats can easily be launched from the parking lot. Across the road look for a pathway alongside the middle lake that offers good fishing spots. This website has a map of the area, as well as a brief description of the park. 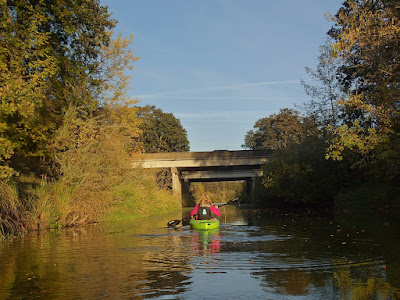 This is not pristine wilderness. You will not be alone here, and you certainly won't find silence, but you may find a bit of hope for spring as the ducks splash in the shallows and frogs sing from the mud. It may not be a destination worthy of a long journey, but it's a pleasant stop on your way from somewhere to somewhere else.