The Gorge/Wapinitia Loop, Part Three: Maupin and the Wapinitia Highway 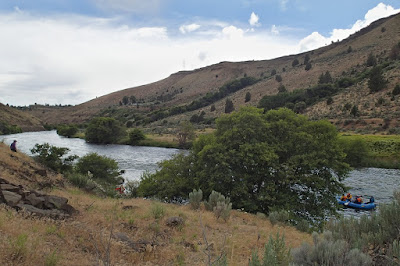 Highway 197 is a long, lonely drive through desert country, but in the small town of Maupin the road briefly drops into the wild and beautiful Deschutes River Canyon. Named for pioneer Howard Maupin, this area was settled in the late 1800s around a ferry across the Deschutes. Now the ferry is long gone and a modern bridge crosses the wild river. Maupin is famous as a rafting town, and several local outfitters offer whitewater runs for those who don't have their own gear. This section of the river is also a popular place for fly fishing, and wildlife abounds in the steep canyon. The snowmelt-fed water rushes briskly along, clear and cold under the towering rock cliffs.

Visitors to the canyon soon notice the railroad running along the west side of the river. This track was the focus of a railroad war  in the early 1900s. Railroad baron James Hill planned his tracks to run along the west bank, while his rival, Edward Harriman, built on the east bank. Scuffles ensued and supplies were sometimes stolen or destroyed, but the real battle was with the hard stone walls of the rugged canyon. After a few years both railroads had trains running, but after Harriman's death in 1909 the companies became more cooperative, eventually combining tracks to reduce maintenance costs. Today, trains still run on the westside track as they have for over a century.

Drive over Maupin's bridge and you will find the Deschutes River Access Road. Maintained by the Bureau of Land Management, this road is actually built on the roadbed of Harriman's eastside railroad. Turn either way to follow the river along the bottom of the canyon; the road is paved for a while before it gives way to washboard and gravel. Several campgrounds are spaced along the access road; river access is excellent, but amenities are simple. Maupin City Park offers more plush camping, and there are a few private campgrounds in the area as well. It is worth noting that campgrounds fill quickly on summer weekends and dispersed camping is not allowed in the canyon; if possible, come during the week or after Labor Day. 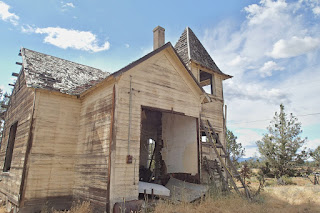 Fill your tank at the old-fashioned service station and perhaps pick up an ice cream cone in this friendly little town, then backtrack on 197 for four miles to the Wapinitia Highway (216). For one last abandoned building, follow the highway for six and a half miles and turn left on Reservation Road. One mile off of  216 you will find the remains of tiny Wapinitia, notably an old church building sagging into oblivion. Return to 216, which shoots as straight as an arrow across the wide desert. Then suddenly, at the small town of Pine Grove, the road enters a vast mountain forest. We are now in the Cascades, headed back to Portland.

This is an easy drive through beautiful woodlands with the Warm Springs Reservation on the left and the Mt. Hood National Forest on the right. Our small forest byway meets up with larger Highway 26; turn right, toward Portland. There is camping at shallow Frog Lake, a popular family gathering place. If you haven't had enough hiking, turn at Frog Lake but look to your left for the trailhead to Twin Lakes, a beautiful seven-mile round trip that features, not surprisingly, two mountain lakes. 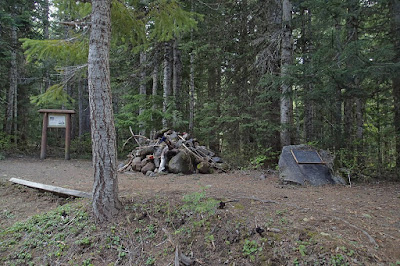 For one last historical stop, turn north at the Highway 35 junction (toward Hood River) and drive about 2.5 miles to Forest Road 3531 (Barlow Pass Sno-Park). Follow this road to find the final resting place of an unknown pioneer woman, as well as a hike along the old Barlow Road. Wagon ruts can be found in the woods across from the grave. Pause in this peaceful place, then return to the busy highway. Drive 35 back to 26 and descend the broad and winding road to Portland, a town that was named by the flip of a coin in 1845 (the other choice was "Boston").

Once upon a time, hardy, adventurous people left behind everything they knew to risk an onerous journey to a promised land known as "The Oregon Country." Many never lived to see that land, but others arrived to build new lives in a largely unmapped wilderness. Today we can still find traces of their lives in the Columbia Gorge, in the high desert, and on the Barlow Trail. Native Americans pull salmon out of rapids as they have for centuries, dusty wagon roads wind across rugged countryside, and weather-scarred wooden buildings hold themselves tenuously together, abandoned and empty save for the ghosts of dreams. 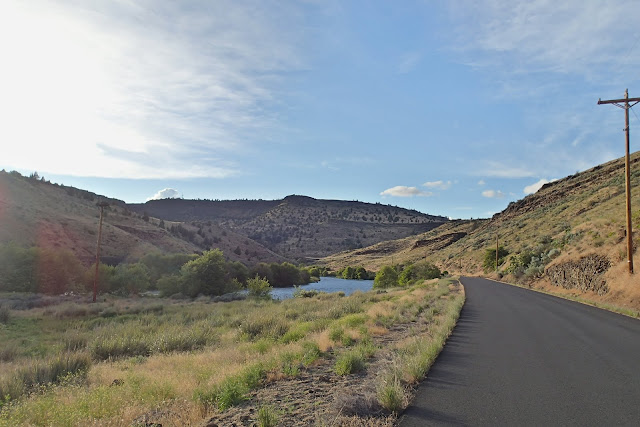 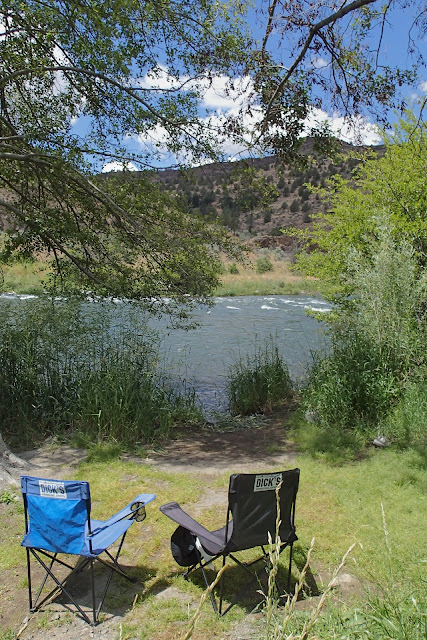 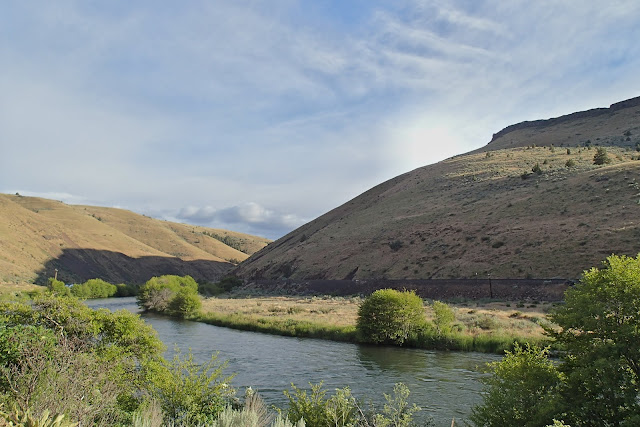 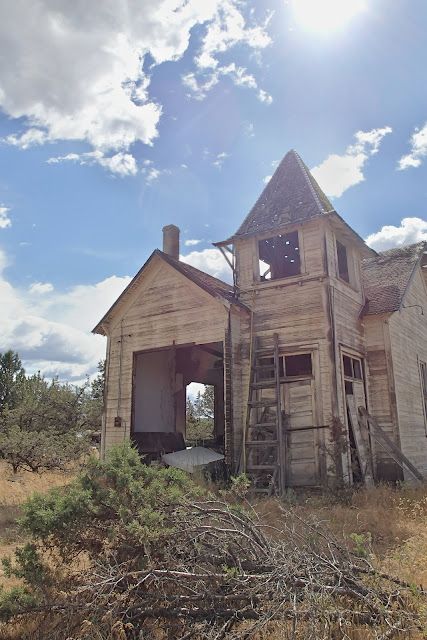 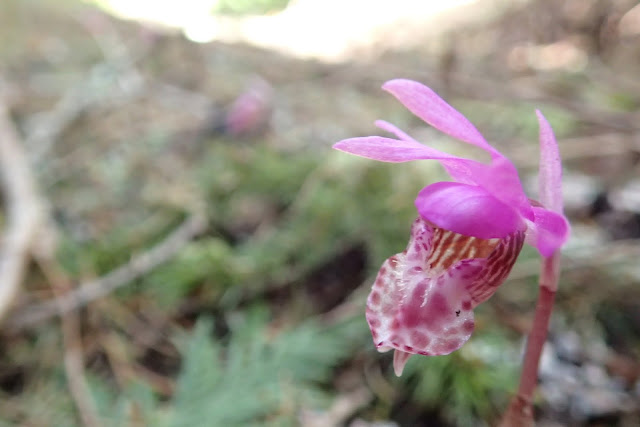 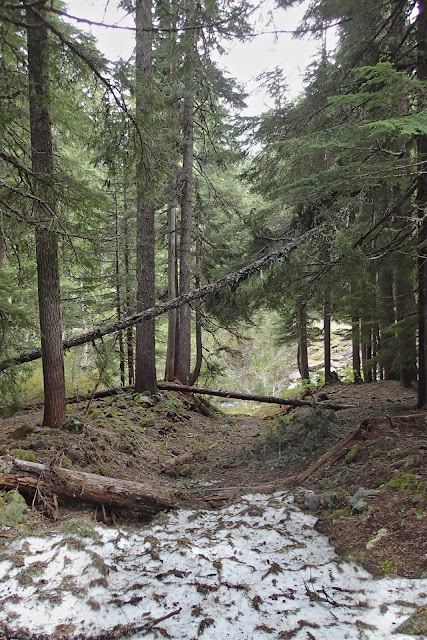 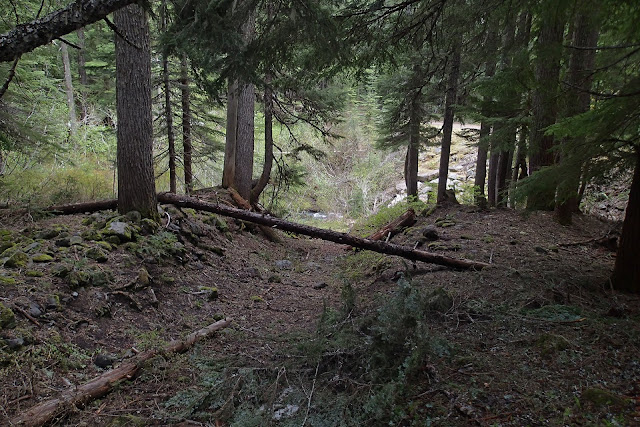 The Gorge/Wapinitia Loop, Part Two: The Ghosts of US 197

Highway 197 leads south from The Dalles into the wide Central Oregon plains. Here the pioneers saw grazing land and brought cattle and sheep. Dryland orchards and wheat were planted. The desert bloomed for some, but this land demands much from those who would make their living here. Tiny towns sprang up, then faded away. The railroad brought improved transportation; some made a fine living, some saw their dreams fade away in the desert dust.

Many traces of those dreams remain in place names, in the history books, and in the old buildings left behind. Some of these are in "ghost towns," but often a few hardy residents remain. Please be respectful when stopping beside abandoned structures; it might be news to some "west-siders," but just because you find an old building doesn't mean it's a museum. Respect fences, gates, and signage; you can see just fine from the road. It should go without saying that all we take is pictures; in fact, we don't even photograph private residences without permission from the owner.

Our first town is only about nine miles down 197. Watch on the left for Boyd Market Road. If you don't see it in time, no need to turn around; there is another left turn just past the first, and the two meet up. Boyd dates back to around 1870, when it was settled near a popular spot to cross Fifteenmile Creek. The town once boasted a store, a granary, a mill, a school, a post office, and a church. Bypassed by the highway, the community lost its railroad access in the 1930s. Not much remains today. Drive past the few residences (some abandoned, some still occupied) to find the tall, sturdy granary built by T. P. Boyd in 1883. An old barn occupies the hill behind it. Return to Highway 197 the way you came. 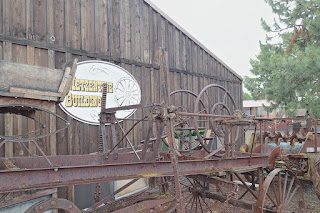 A few miles south, turn right to visit the still-living pioneer town of Dufur (motto: "Ask not what you can do for Dufur, but what Dufur can do for you"). Established in the 1870s, this farming town made a convenient stop between The Dalles and Wapinitia. Fruit trees, wheat, and grapes are still grown around a community that is proud of its history. Check out the stately brick Balch Hotel. Built in 1907, it is still renting rooms. On the other side of Fifteenmile Creek stands an impressive compound comprising the Dufur Living History Museum. A two-story log cabin houses displays, and a schoolhouse built in 1892 has been moved here from the nearby settlement of Endersby. While the indoor exhibits were inexplicably closed during our recent visit, we spent a long time in the outdoor display of vintage farm equipment. This extensive exhibit provides signage explaining the use of the equipment, most of which was horse-drawn. While there, look for another lost dream: an antique oil rig. Despite high hopes, oil was never found in the surrounding hills. 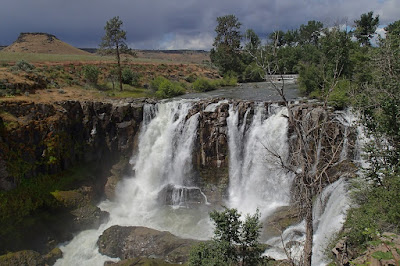 Back on 197, cross Tygh Ridge, drive through Butler Canyon, and take a left turn onto Highway 216 to White River Falls State Park. The picnic area offers an excellent view of the falls and canyon, but for a closer look walk down the steep dirt path. The White River, born on the slopes of Mt. Hood, plunges and froths through the canyon it has carved. Beside the falls sits an eerie abandoned powerhouse that supplied nearby towns from 1910 to 1960; the gaping doors reveal glimpses of the old turbines still inside. 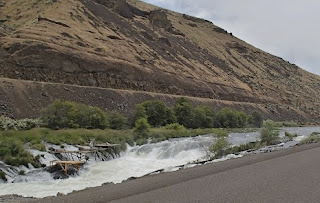 Continue on narrow Highway 216 to see the site of Sherar's hotel and toll bridge, where Joseph and Jane Sherar hosted countless travelers in Oregon's early days. Nothing remains of their settlement today; the land is tribally owned, and a day-use fee is charged. This rugged section of the Deschutes, with its powerful waterfall, is a traditional fishing site for Native Americans. 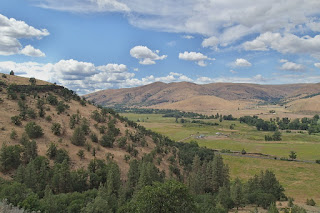 Return to 197 and cross the highway to find the small, sleepy community of Tygh Valley. Follow the main road through town to Wamic Market Road. This road quickly climbs to reveal breathtaking views of the beautiful Tygh Valley. Drive 5.5 miles to the friendly little town of Wamic, the "Gateway to the Barlow Road." You will find a well-preserved schoolhouse, moved to this location from nearby Smock Prairie; according to the local folks, nothing remains of that old community but the schoolhouse you see here. You will also find the picturesque Pratt House; in fact, Wamic was originally known as "Prattville." Continue down the gravel street to find a tiny, rugged pioneer cemetery tucked underneath the pine trees.

Retrace your route back to 197 and drive toward Maupin, where we will spend some time beside the Deschutes and top off our gas tank before exploring the Wapinitia Highway. 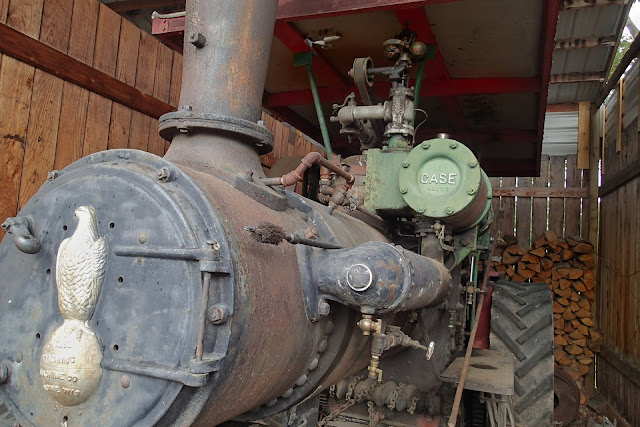 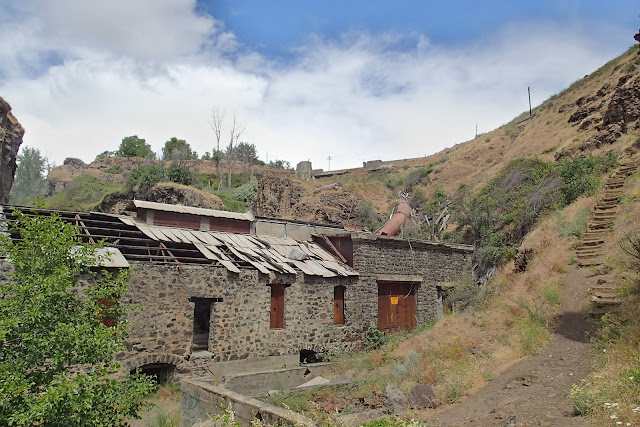 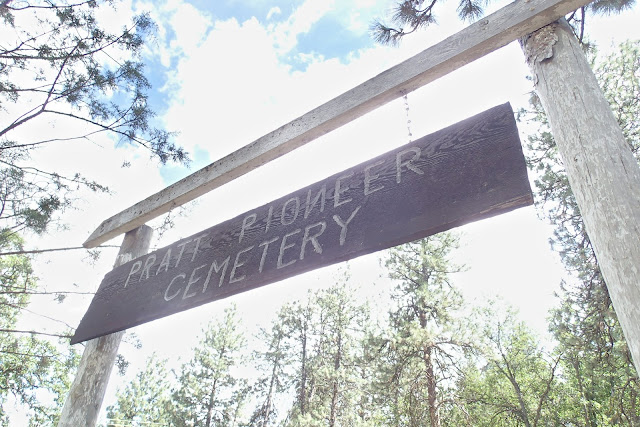 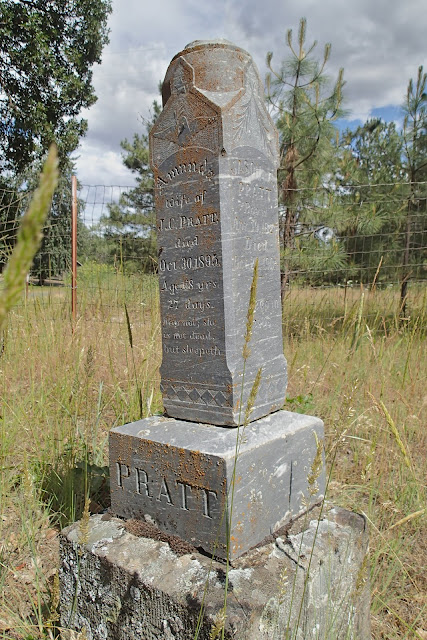 Posted by Sally Gosen Case at 1:10 PM No comments: