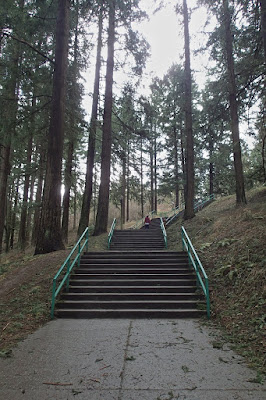 The midwife called it "Mt. Labor." She sent us to ascend and descend the 200+ stairs of Mt. Tabor in hopes of encouraging our overdue baby (now our photographer) to make his entry into this world. With my husband by my side on that chill January afternoon, I proceeded to the end of SE 69th Avenue to trek uphill and down.

Photographers, it seems, cannot be hurried, but the stairs of Mt. Tabor had their part in his birth soon afterward.

We moved away from Portland when our son was small, and he recently observed that he had never actually seen Mt. Tabor; his view on that winter day had been somewhat obscured. So it was that he and I returned to the end of 69th Avenue on a chill January afternoon to observe his twenty-second birthday. Side by side, we climbed the stairs once again. 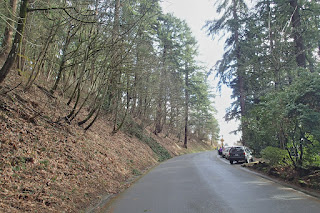 This 197-acre park is a Portland landmark, a tree-covered hill situated in a mostly-level residential southeast neighborhood. It is, in fact, a volcano, dormant but not necessarily extinct. It is part of the Boring Lava Field, named for the nearby town, not for the level of interest it generates. Put simply, Mt. Tabor was formed when a small amount of magma squeezed up through a fracture in the earth's crust; in fact, part of the cinder cone can still be seen inside the park. 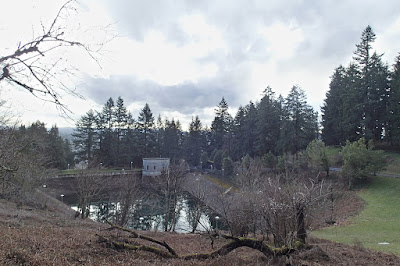 Portland's connection with this hill officially began in 1888 when part of it was designated as a park. Over the years, city reservoirs were built on the hillsides and additional parcels of land were added. Specimen trees planted over 100 years ago still flourish in the rich volcanic soil. Our stairs were built in 1914, paved roads were laid down, and the growing population enjoyed their weekends in this pretty park. In the 1930s, visitors could rent horses to ride on the trails, and an old soapbox derby track remains on the slope above the reservoirs.

In recent years the reservoirs have been retired from the Portland water system, but they are listed on the National Register of Historic Places. The horses are long gone, of course, but bicycle riders build their stamina on the park's roads and trails, grimacing on the way up and grinning on the way down. Families with packs of children dodge joyous dogs and wiry runners. Once a year, the old track is cleared for the PDX Adult Soap Box Derby, now in its twentieth year. Stop by on August 19th to watch the fun, details will be updated on the event's website and Facebook page. Mt. Tabor truly is a place for everyone.

On our chill January afternoon, the roads and trails were busy and the frozen reservoirs lay silently in colors of jade and black pearl. Hardy songbirds flitted among the vintage shrubbery as we crested our 200+ stairs and wandered through the park. Pathways ranged from pavement to slippery mud, and great branches of century-old trees lay torn in the grass, victims of ice and snow. The reservoirs' historic gatehouses watched over their pools, their turreted tops suggesting that hidden archers waited to defend the water supply.

Visitors to Mt. Tabor will find paths, roads, a tennis court, a basketball court, a children's play area, an amphitheater, an off-leash dog park, and a covered picnic area. They will find wildlife, 57 species of trees, and excellent views of the city. They will also find the remains of the volcano's cinder cone, which looms over...the basketball court. Never mind, its proximity to the parking lot makes the cone accessible to everyone. In fact, a surprising amount of this urban  volcano is accessible (see the city's site). This park also gets my vote for Most Picturesque Restrooms, as well as Most Helpful Volunteers. 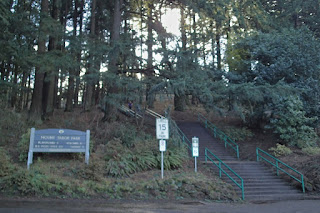 Before your visit, check out the Friends of Mt. Tabor Park's website. This excellent resource has information on everything you could want to know, from how to identify trees to how to adopt a park bench. Our stairway is only one small entrance. As seen on this map, Mt. Tabor is an easy place to find; in fact, it is visible from miles away.

Of course, the photographer lingered long in this bit of urban forest, just as he did 22 years before. The park invited us to stay and remember a part of Portland's history that had become part of our family's history, as well. 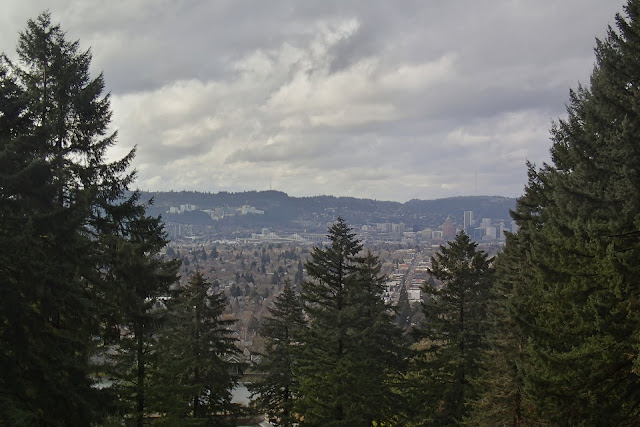 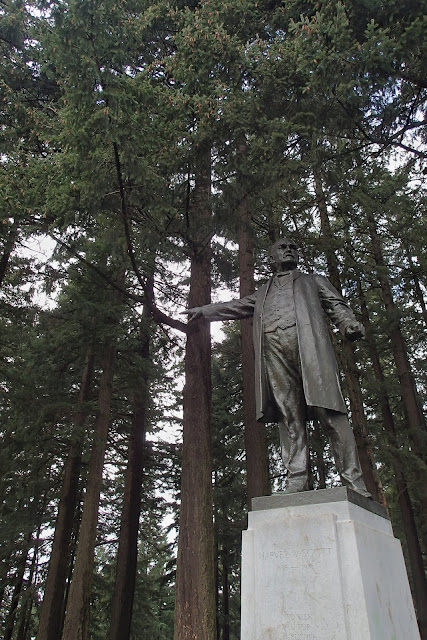 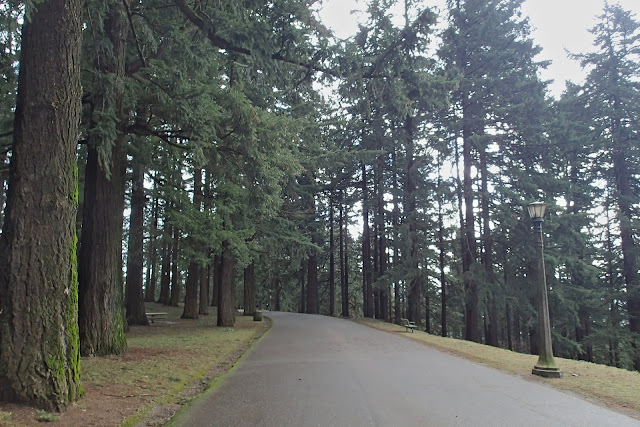 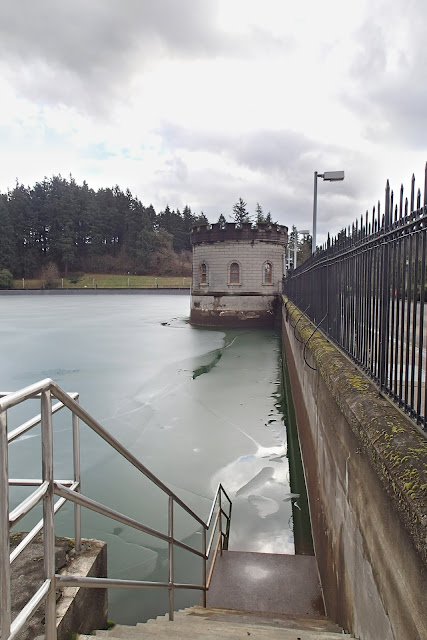 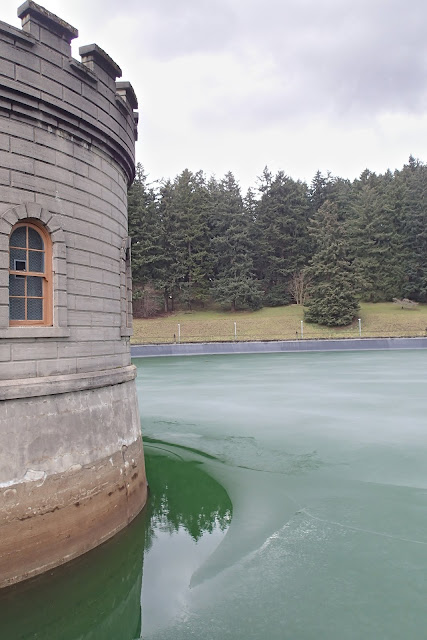 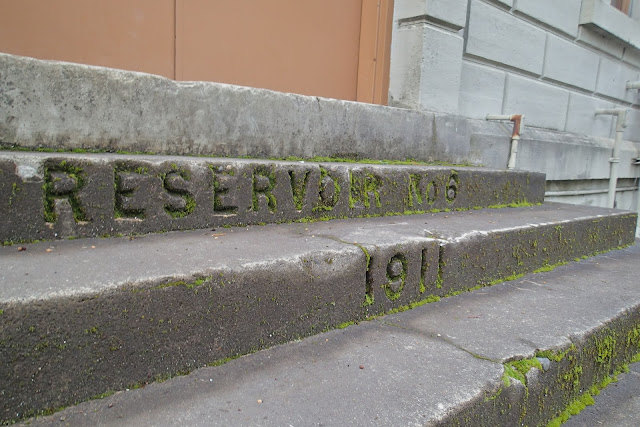 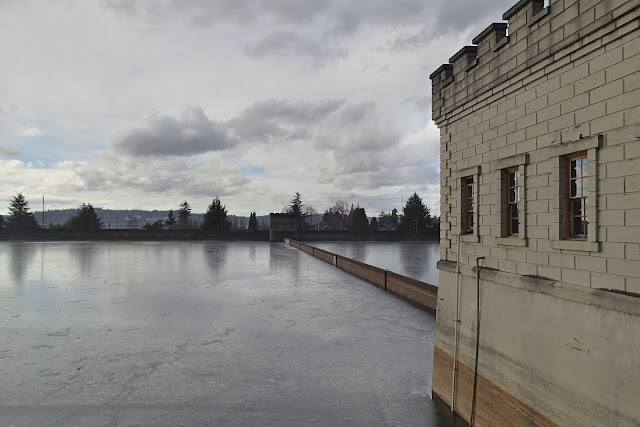 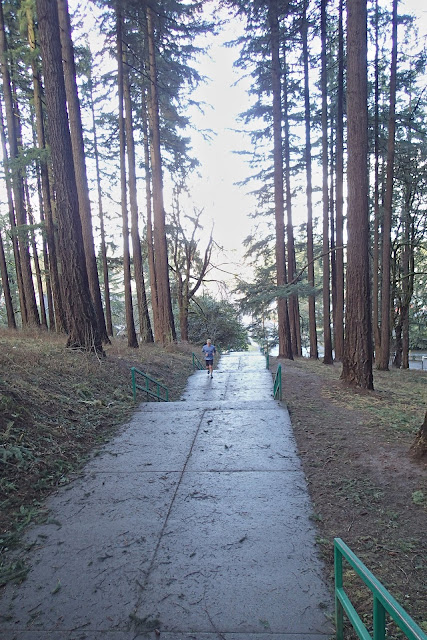