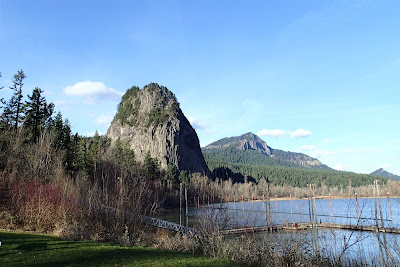 One of the most well-known landmarks in the Columbia River Gorge, Beacon Rock towers 848 feet above the river on the Washington side. This enormous piece of basalt is apparently the core of an ancient volcano. The softer surrounding soil eroded away, leaving a marker where Lewis and Clark first noticed a tidal effect in the Columbia's water levels. 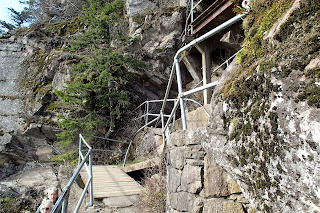 Once slated to be broken up for its basalt, in 1915 the rock was purchased by Henry J. Biddle (reportedly for $1) with one aim: he wanted to build a trail to the top. He was able to secure the aid of Charles Johnson, who had helped to engineer the historic Columbia River Highway. It took two years to build less than a mile of trail, but one look at Beacon Rock explains why: this volcanic plug's sheer walls necessitated a dizzying number of switchbacks and catwalks, and there was no way of planning ahead as they worked their way up the vertical rock face. Improvements were later made to his trail by the Civilian Conservation Corps, and Mr. Biddle's heirs donated his enormous rock to the state of Washington as a state park. 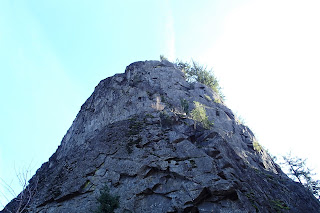 Today, Beacon Rock's trail still offers a short but steep hike as well as opportunities for rock climbers. To get there, take I-84 out of Portland to the town of Cascade Locks and cross the Columbia on the Bridge of the Gods (the toll is $2 at this writing) and head west on SR14. Alternatively, you can take the I-205 bridge and drive east on SR14 to the trailhead; this route is narrower and more winding than the freeway, but there is no toll. In any case, be prepared to pay a hefty parking fee ($10 at our most recent visit), but the fee covers the entire state park, so it's possible to make a day of your trip to this riverside retreat. There are even campgrounds for car camping, horses, and group camping.

You are likely to have plenty of company as you find a place to park your vehicle and walk toward the trailhead; this is definitely one of the top hikes in the Gorge, so it's no secret. The trail begins alongside SR14 and heads straight into the woods. Watch for wildflowers in season, and note the large boulders lying crumbled at the base of the rock. Begin to climb. 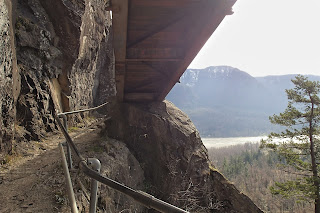 This is not a difficult hike; most people should be able to manage it if they pace themselves (our intrepid photographer managed it with a not-quite-healed foot fracture!). Sturdy boots with non-slip soles are a great help, as is a hiking staff. Hikers who suffer from vertigo may wish to rethink this climb, as the passage is narrow in places and the catwalks might prove unnerving. 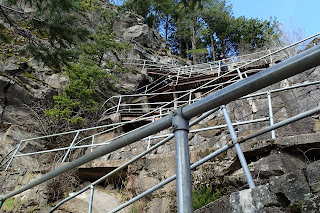 The trail consists mainly of a series of switchbacks stacked on top of each other all the way up the side of the rock (at one point we looked down and counted 17 switchbacks visible below us). Views over the Gorge become ever more spectacular as the trail climbs higher. Looking across the river, you can see evidence of the massive landslide that dammed the Columbia long ago. This was later breached and became the infamous Cascade Rapids, now drowned by Bonneville Dam (also visible). Clear days offer spectacular views up and down the river, but on a damp day you climb silently into the mist. Either way, the top is a welcome achievement, with splendid views through the trees. 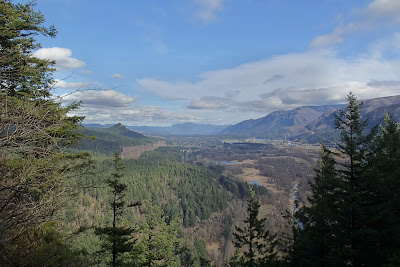 Having reached the top, walk back down the way you came, pausing occasionally to take more photos. Be sure to visit the adjacent park for views of the rock, as well as river and trail access. The short but unique Beacon Rock hike may not be quite in Oregon, but it's definitely worth a bit of a drive out of Portland. Mr. Biddle was right: a trail to the top was just what this big rock needed. 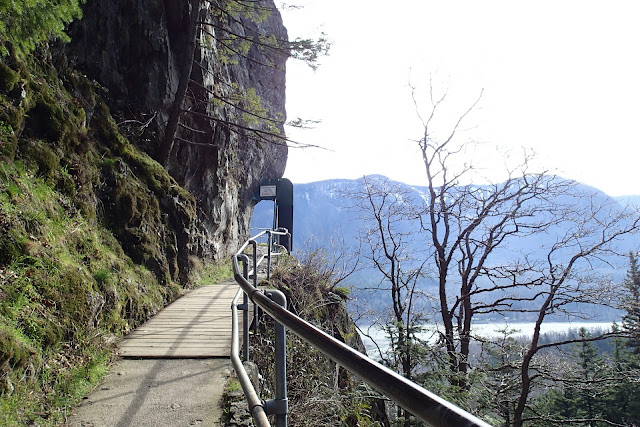 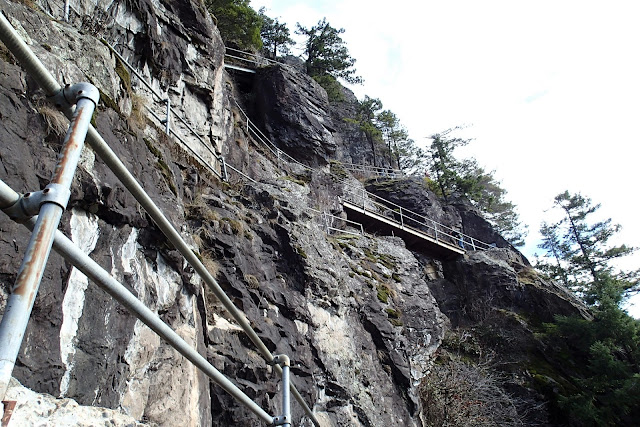 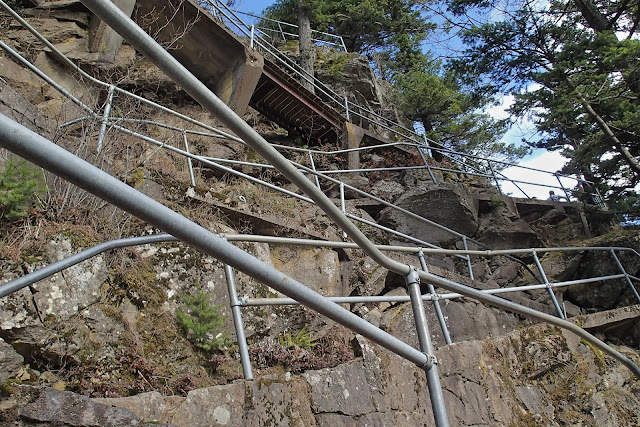 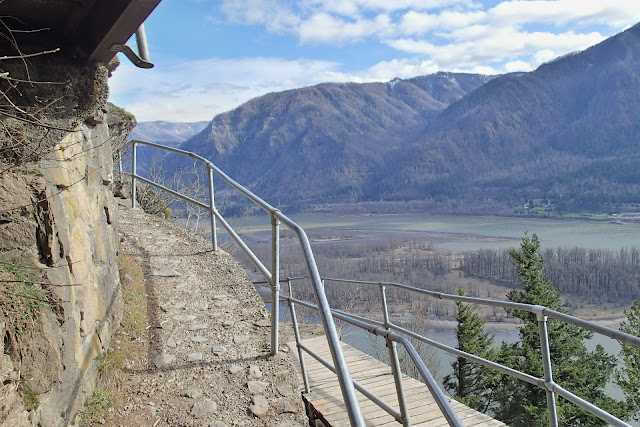 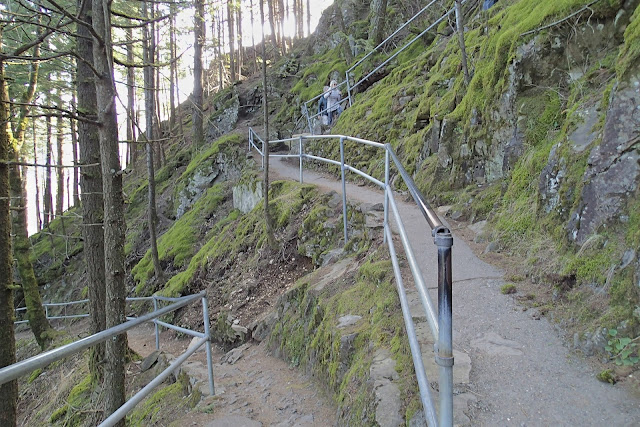 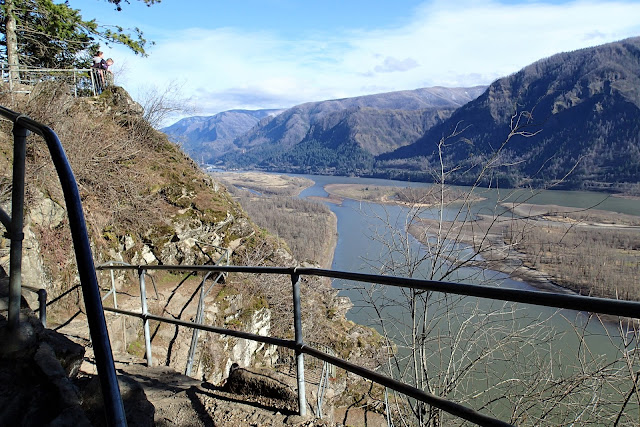 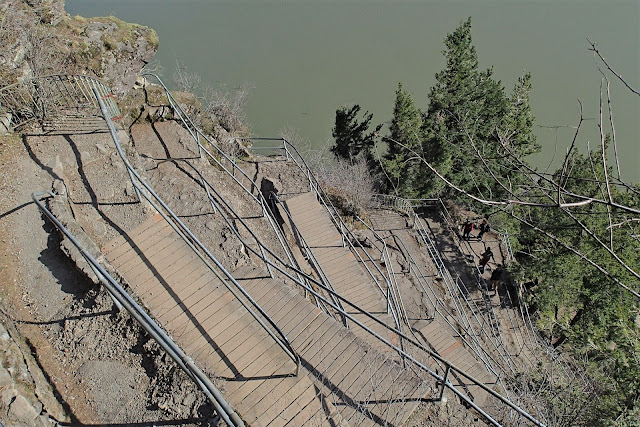 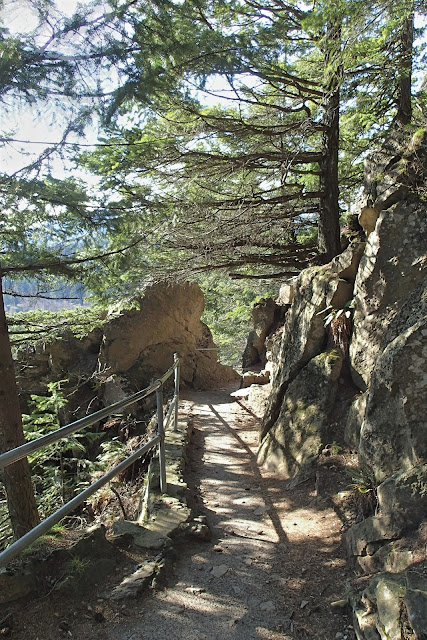 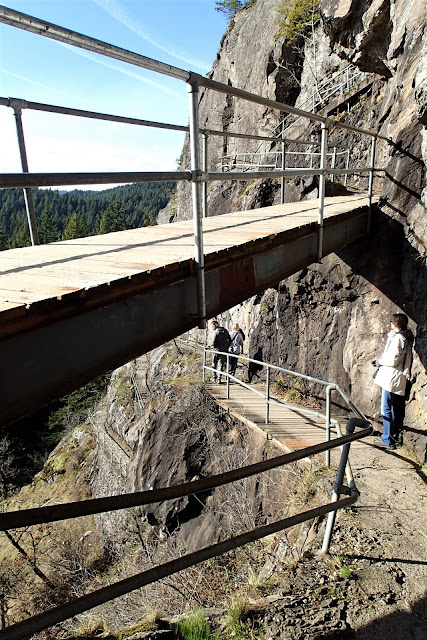 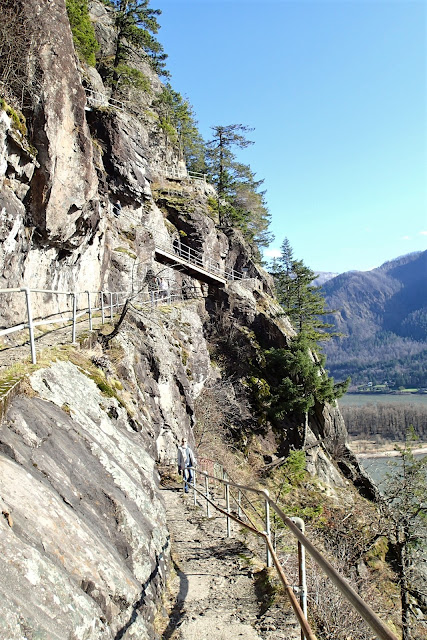