Ah, the Columbia River Gorge: where the mighty, fearsome river of the West slices briskly through rugged, wind-swept cliffs. Where travelers of olden days left their indelible stamp in the annals of time on their way to the shimmering Pacific. This has long been the place of dreamers, of wanderers, and of trail-blazers alike. What better way, thought I, to experience the area's rich and vibrant historical heritage than to retrace the steps of our forefathers on this, the 100th anniversary of the Historic Columbia Gorge Highway inauguration.

Just kidding. This trip was planned by college students. I got a text message the morning we were set to leave: "Dude, my dad just told me that today is the 100th anniversary. Can you believe it?" And so yet another misadventure begins. 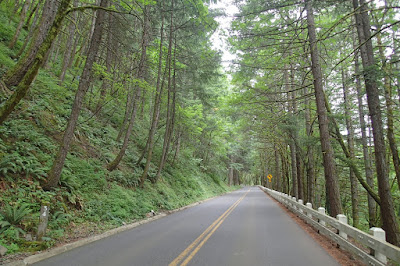 The Columbia River Gorge Highway was officially and ceremoniously opened to the public on June 6th, 1916, as part of the Portland Rose Festival celebration. It is difficult, however, to put an exact date on the opening of what was then the most massive undertaking the region had ever seen. The first incarnation of the road, a six-mile rustic wagon road from Bonneville to Cascade Locks, was completed in 1857 when the Oregon Trail was in full swing. This was added to over time, and by 1882 a continuous track existed from The Dalles to Sandy, but this trail was a hassle at best and a hazard at worst. By the 1910's, with Ford's Model T reaching the height of its popularity, it was clear that a makeover was in order. 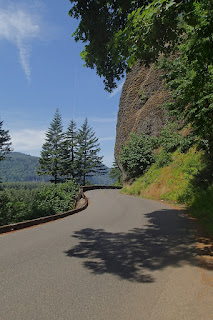 Construction of the new road began in 1913 under the direction of Samuel Hill and Samuel C. Lancaster. The route was carefully picked to accommodate easy motorcar travel and maximum scenery (Samuel Hill actually hung from the side of cliffs to choose the best views), and by the time of the ceremonious 1916 opening the paved road stretched from Portland to Hood River. Work continued on the road until June 27th, 1922, when the road was completed from Astoria on the coast to Pendleton in Eastern Oregon. I will now be merciful and spare the reader the rest of the history lesson, but the curious can feel free to investigate further. Here are a few links to get you started: ColumbiaRiverGorge.info, ColumbiaRiverImages.com, and Oregon.gov. 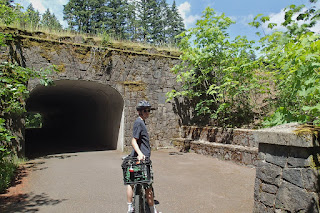 Now fast forward a bit. June 6th, 2016, Ryan (an honorary member of the Case household) and I loaded up our gear and embarked on yet another Smell-The-Roses bicycle trip. For those of you not familiar with this type of bike tour, it is a more relaxed alternative to the fast-paced, adrenaline-filled world of normal bike touring. You will not be setting any speed records, but I promise you that you will experience much, much more of what your route has to offer. See our previous post on the Oregon Coast Bike Route for more information on this kind of trip. As always, make sure that you are physically prepared, that your bike is well-tuned, and that you bring along the proper emergency equipment. Even slow trips can be hazardous. 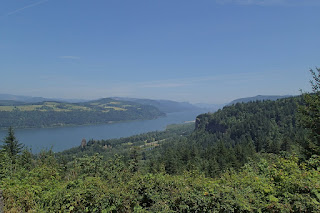 The Columbia Gorge Bike Route officially begins in downtown Troutdale and heads east, then south for a few miles along the Sandy River. If you have plenty of time, be sure to stop by the historic buildings and pleasant shops that "The Gateway to the Gorge" has to offer. We joined the route from Stark Street, which heads east from Troutdale and Gresham and crosses the river to meet the historic highway. From there, right off the bat, you are faced with the largest obstacle of the entire trip: a gradual but arduous three-and-a-half mile climb up to the Portland Women's Forum Viewpoint. Take your time on this, and feel free to stop by the Corbett Country Market for some refreshments and last-minute supplies (and maybe some delicious BBQ, you do need protein after all). After the store your grade improves, and before long you will reach the viewpoint at the very top. Stop here to soak in your first view of the Gorge, and you will definitely want to keep your camera handy from here on out. 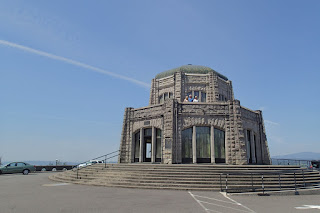 Shortly after (and more importantly downhill from) the viewpoint is one of the most photographed areas of the Gorge: Crown Point, and sitting on it, the majestic Vista House. Built in 1918, this architectural marvel was put in place for a couple of reasons. The first was to showcase the natural beauty of the area, with panoramic views stretching in both directions down the Gorge. The balcony on the second floor is the ideal place to experience this as long as one is not afraid of heights. The second purpose is to be Oregon's (and possibly the world's) most extravagant... restroom. Back in the days of Model T's when travel was slower, the average traveler needed frequent pit stops, and Vista House was put in place for just such a purpose. This is definitely worth a stop on your tour, as it also offers brochures and information on the road ahead. Visit the Friends of the Vista House website for more information and for special events.

Moving on, you have a steep, windy, but scenic few miles to coast back down to river level, where you will begin to come across the Gorge's famous waterfalls. First is Latourell Falls, a tall and majestic waterfall that is well worth the short jaunt down to the viewpoint or the longer 2.4 mile loop to the upper falls. Shortly after, watch for Shepperd's Dell, a small area that packs a scenic punch. Look for a short walkway into the dell by the side of the road. Bridal Veil Falls is a 0.6 mile out-and-back hike that is worth the trip if you have the time. Lock your bikes, though, as this trail looks deceptively bike-friendly, then quickly becomes a steep gravel trail meant for foot traffic only. Wahkeena Falls is a 0.7 mile out-and-back that features several small waterfalls along the trail.

After Wakeena, watch for one of Oregon's most recognizable landmarks: Multnomah Falls, highest waterfall in Oregon and second highest in the nation. This falls is so popular that the parking lot is almost always packed and the freeway exit closed. But you're on a bike. Enjoy your freedom. Stop by the bottom viewpoint for a scenic picture, or hike the 2.2 mile trail up to the top. After Multnomah Falls you enter the Mt. Hood National Forest and dispersed camping is legal, but make sure to call ahead to check for current restrictions. Two miles down the road is my personal favorite out of all the falls, especially on a hot day after a long bike ride. Lower Oneonta Falls is 0.6 miles up a dramatic gorge that is sometimes only a few yards wide. Lock your bike at the bridge, climb over the large logjam, and walk/wade up the creek to the falls. Yes, this is a difficult one to conquer. Yes, you will get very wet (as of early June the water was up to my armpits, and I am 6'1"). But the rewards are well worth it. This beautiful falls tumbles off the canyon wall into a deep swimming hole at the canyon's end. Here you will find a wide variety of ferns and wildflowers, some of which cannot be found anywhere else in the world. Keep your camera dry (mine is waterproof), because this is one place you will not want to miss.

Ride through the historic tunnel and watch for Horsetail Falls tumbling down right next to the road (for a longer hike near this falls, check out our previous post). Soon you will find Ainsworth State Park, and a lovely hiker/biker camp. The fee is only five dollars per person per night in a secluded field with a picnic table, fire ring, restrooms, and showers available. One note: this is a popular campground that often has a "Campground Full" sign out by the road, but that does not include the hiker/biker camp. You will almost always have room, no matter what the sign says. 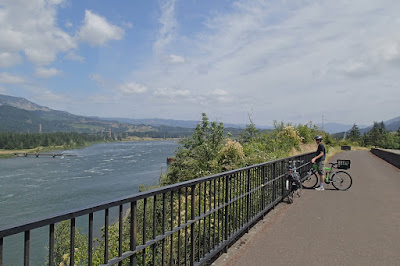 From here the Historic Highway ends for cars, as it joins the newer I-84. But not for you, my dear bicyclist, not for you. Bike paths are constantly being added and improved upon to give bicyclists a safer alternative to the hazardous I-84, and this includes several sections of the Historic Highway that are only open to bicycles. The Oregon Department of Transportation has released three maps outlining the official route, one from Troutdale to Cascade Locks, another from Cascade Locks to Hood River, and a third from Hood River to The Dalles. An older publication, while somewhat outdated, goes into greater detail and gives a better description of the route. These paths are still being added to, and eventually you will be able to get all the way to The Dalles without going on the freeway at all. Keep in touch with the Friends of the Columbia Gorge for updated information. So pack up your panniers (oh, excuse me Ryan, saddle bags, this was a source of argument on the trip) and discover the Columbia Gorge for yourself. As always, I'll see you out there! 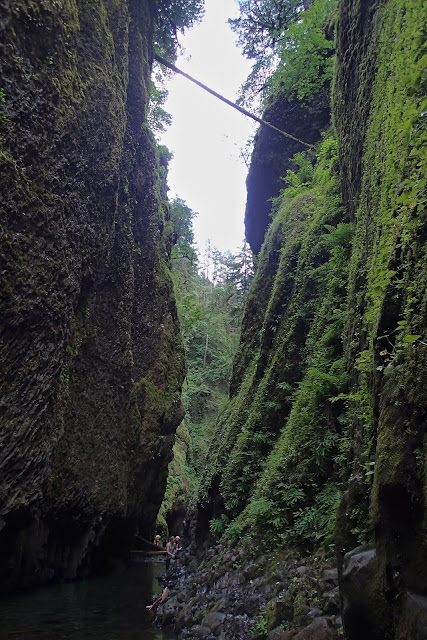 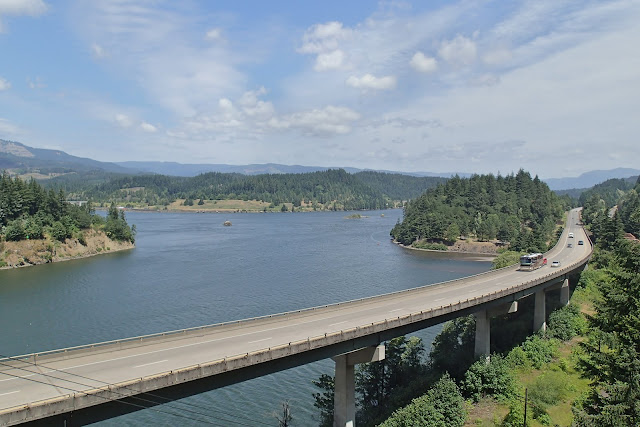