A Day by the Bay, Part Two: Kilchis Point 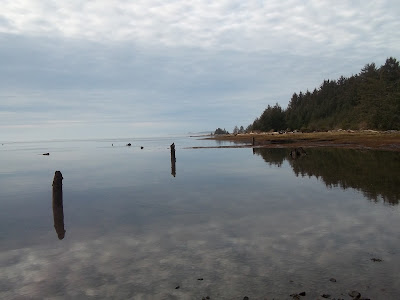 Our last stop on this less-traveled section of the north coast brought us to the rowdy bar of Tillamook Bay. This time, we're hiking to a peaceful backwater. Standing beside the glassy water at Kilchis Point and listening to the shorebirds converse in the mudflats, it's hard to imagine that this is the same bay. 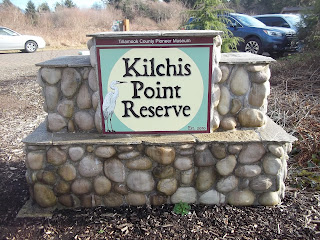 Kilchis Point Reserve is located in Bay City, a small village between Tillamook and Garibaldi. Once envisioned as the "San Francisco of the North," this town had its heyday in the 1880s. Fires and a faltering economy gradually took their toll; today the most noticeable features of this bayside community are a store that sells long sticks of pepperoni and a really big pile of oyster shells. One of the least noticeable things is Warren Street, which appears at the south end of town. Turn towards the bay (not uphill) on this narrow, sometimes blocked, residential street, cross the train tracks, and look on your left for the Kilchis Bay Preserve sign. Perhaps someday this will be more clearly marked, but a great many people seem to find it anyway; rain or shine, this trail is popular with literally everyone and his dog. 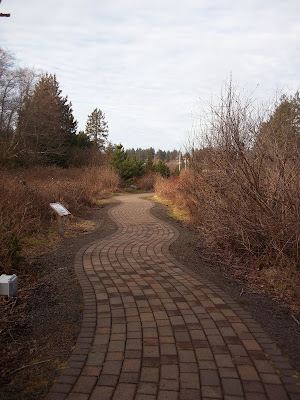 Park in the small, paved lot. The trailhead provides restrooms, interpretive signs, and a bench with a rustic arbor. The trail has three main sections, as seen on this map. The first section, known as the Trailhead Loop, is easily accessible to all. Wide and smoothly paved, this is a wonderful opportunity for small children and people with limited mobility, passing through a marshy coastal forest for about 1/3 mile. Signs dotted along the way point out native plants and describe details of this area's history.

As a matter of fact, history takes center stage in this 200-acre parcel of wetlands, woods, and mudflats. This is no wonder, given the fact that the reserve is a major project of the wonderful (and sometimes downright odd) Tillamook County Pioneer Museum. While the hiking trails total only about two miles, it's easy to spend hours here just reading the signs and trying to imagine this place in previous centuries. 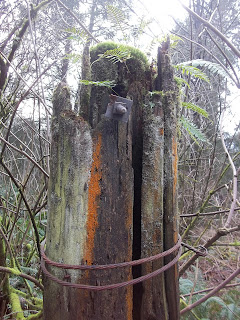 There was a large Native American village here when Joe Champion arrived in 1851. He lived in a hollowed-out spruce stump until he could get his cabin built. As more white settlers made homes in the area, transportation for supplies became a serious problem. Ship captains would not risk the treacherous bar, and the Coast Range mountains stood to the east. In 1854, local citizens banded together at Kilchis Point to fall trees and forge spikes. The result was Morning Star, a sturdy little ship that could bring supplies from as far away as Portland (a smaller-scale replica of the boat now stands in front of the Tillamook Cheese Factory). The Whitney Lumber Company was headquartered at the Point from 1919-1927, and traces of it remain today in posts and piers. Logs could be tied into rafts here and floated to Garibaldi at high tide. 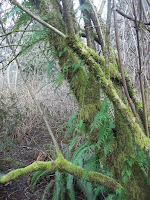 The coastal climate tends to quickly eradicate any trace of human existence. The trails at Kilchis Point are walled in by thick forest understory. Pause and listen to songbirds, shoreline waders, and tree frogs. Human history in this place has been brief; nothing remains from the pioneers or Native Americans, and even evidence of the lumber company has been almost entirely erased by Nature.

For those who can negotiate level gravel trails, there is a second loop and a trail to the water. The latter is not to be missed, wandering through the woods to a level, marshy meadow and ending beside the bay. There is an observation gazebo here, perfect for birdwatching on misty days. Even the more intrepid wheelchair users can access the gazebo, but the path beyond becomes more casual as it enters the tideland. Depending on the current water level, this part of the bay is either a wide mudflat or a shallow backwater. In any case, you will find a variety of shorebirds and ducks. Look for the rotted remains of the lumber company's piers alongside the path. 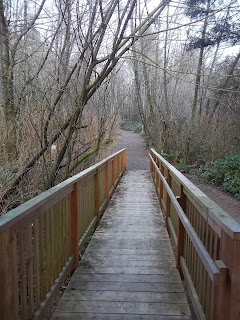 Despite the marshy location, these trails are fairly dry all year long. There are very few muddy places on even the less-developed trails, and wooden bridges and walkways have been constructed in the lowest spots. The reserve was planned and developed by local people who are well familiar with the wet weather and oft-rising waters of Tillamook County. The next time you find yourself driving along the wide expanse of Tillamook Bay, be sure to stop at Bay City. It may not be what the original developers had envisioned, but it's still a great place to spend some time beside the water. 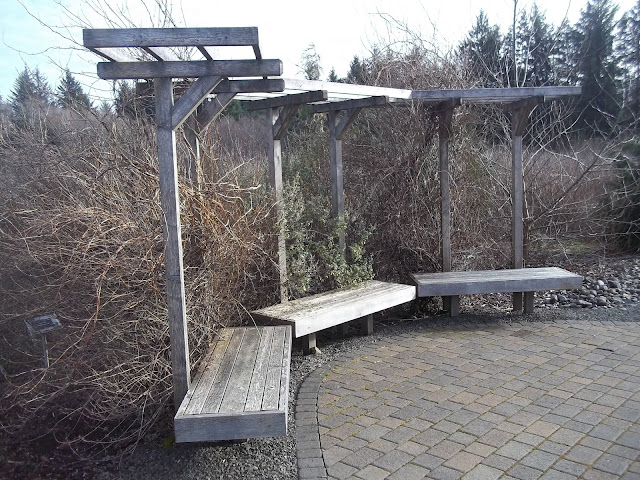 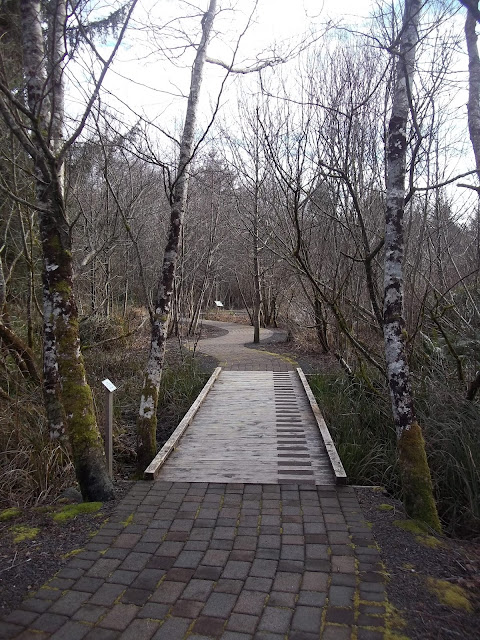 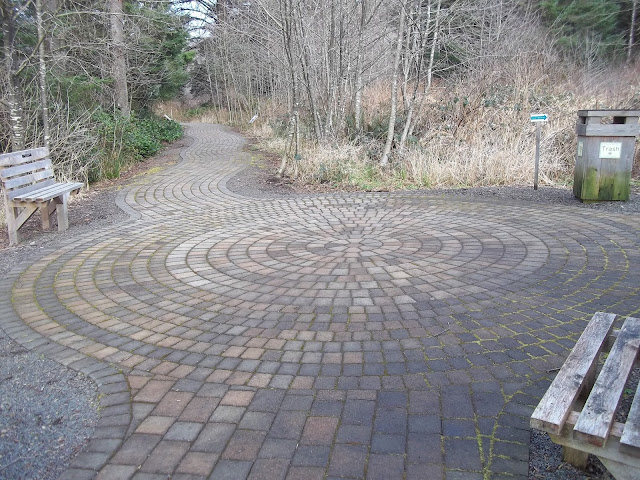 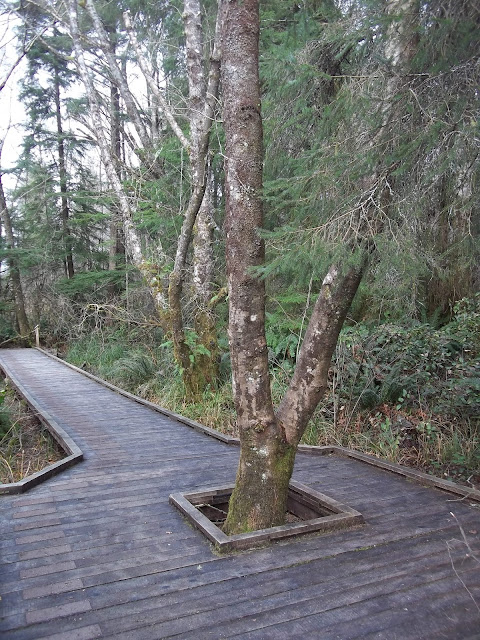 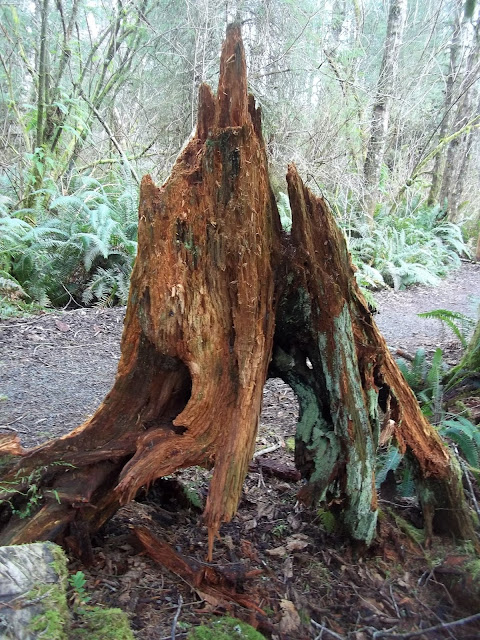 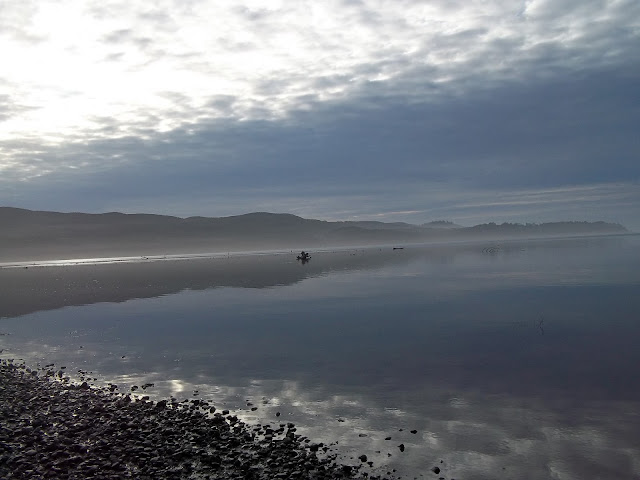 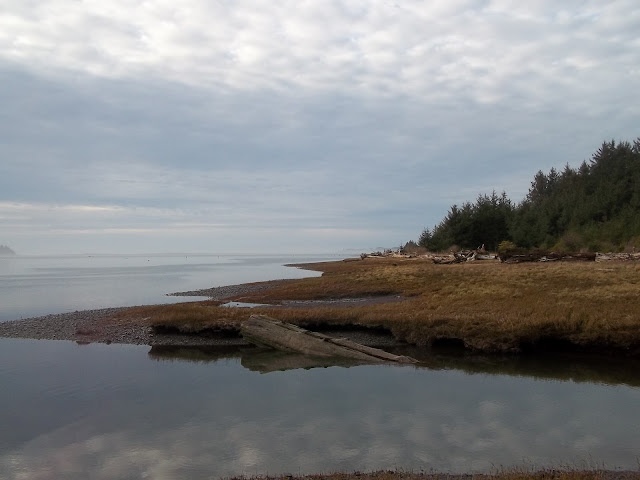 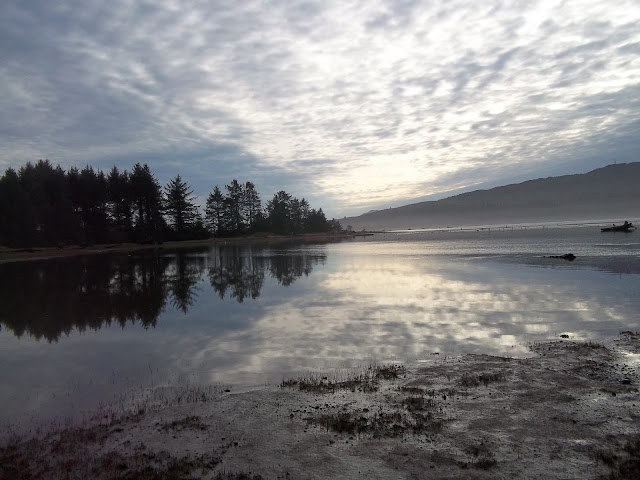